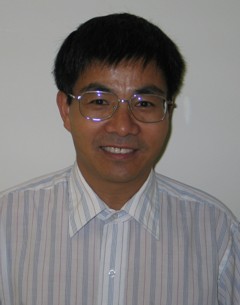 From 1990 to 1996, he was with Valor Enterprises Inc. Piqua, Ohio, initially as an Electrical Engineer and then as the Chief Engineer, during which time he designed an antenna product line ranging from 3 MHz to 2.4 GHz for the company, a very important factor for the prestigious Presidential “E” Award for Excellence in Exporting in 1994. Since April 1996, he has been with the IBM T. J. Watson Research Center, Yorktown Heights, NY, as a Research Staff Member. He has received three IBM’s Outstanding Technical Achievement Awards and one Corporate Award, the IBM's highest technical award. He was named Master Inventor in 2007. He has edited a book titled Advanced Millimeter-wave Technologies - Antennas, Packaging and Circuits published in 2009 by Wiley. He has authored or coauthored more than 100 journal and conference papers. He received the Best Paper Prize of the 2007 IEEE International Workshop on Antenna technology for “Antenna-in-package in LTCC for 60 GHz Radio,” IBM Research's 2011 Pat Goldberg Memorial Best Paper Award in Computer Science, Electrical Engineering and Math for “Organic Packages with Embedded Phased-Array Antennas for 60-GHz Wireless Chipsets,” and the 2012 S. A. Schelkunoff Prize Paper Award of the IEEE Antennas and Propagation Society for “Dual Grid Array Antennas in a Thin-Profile Package for Flip-Chip Interconnection to Highly Integrated 60-GHz Radios,”  He has 40 patents issued and 20 patents pending. His research interests are antenna design, EM modeling, chip packaging, digital signal processing, and communications technologies.

学术报告：毫米波与亚毫米波系统天线的封装设计与评估
Title:  MMW and sub-MMW System Antenna in Package Designs and Evaluations
Abstract: There is an increasing demand for low-cost wireless communication systems that operate in the 60 GHz band to support Gbps data rates. Typical applications demanding Gbps data rates include wireless gigabit Ethernet and wireless uncompressed high-definition video. Recent advances in silicon technologies have enabled single chip solutions, making the 60 GHz technology more commercially attractive. However, for the 60 GHz market to flourish, not only are low-cost devices solutions required, but also low-cost antenna and packaging solutions. The short wavelength at 60 GHz allows antennas to be embedded within a package or integrated on a chip. Antenna-in-package solutions have been recognized to have advantages over antenna-on-chip solutions in bandwidth and radiation efficiency. The realization of a robust, efficient and broadband 60 GHz antenna within a multilayer organic (MLO) or LTCC package is challenging due to assembly difficulties, material selection, and manufacturing tolerances. The proposed superstrate aperture-coupled patch antenna structures provide both wide bandwidth and high efficiency. Two types of packages with integrated antennas have been designed. In the first case, the package has an open cavity for housing the RFIC chip. The advantage of this design is easy antenna feed line layout and low loss. This design is suitable for MLO packages. In the second case, the RFIC chip is attached to the bottom of the package. This design is relatively easier to manufacture and more flexible to layout than the first case and suitable for LTCC packages. Both types of packages have been designed, prototyped and evaluated. More importantly, they have been used in our 60 GHz 16-element phased array applications. The talk will also discuss package structures proposed by other companies and indicate future studies in this area.